London-based FinTech Curve was founded in 2015 by Shachar Bialick and launched in 2016. Its payment card allows users to aggregate multiple debit and credit cards, so users can make payments and withdrawals from one single card. After several funding rounds, they are now said to be worth around $250m, but are they as good a travel companion as they say they are?

*Rates and charges shown are correct as of 21st September 2022

What are they offering?

The payment card Curve allows users to bring all their cards together, removing the need for that bulky wallet. With the strap-line ‘One card to rule them all’, you get an understanding of the idea behind Curve - replace your wallet for one card, Curve (although currently they do not offer the ability to link your Amex card).

What card options and plans do Curve offer?

Curve offers four subscriptions, from their free card up to their metal card priced at £14.99 a month.

Each plan offers standard benefits from the ability to switch payment card post transactions to ‘fair’ FX rates and an allowance of fee-free ATM withdrawals during the week while using a Curve card abroad. 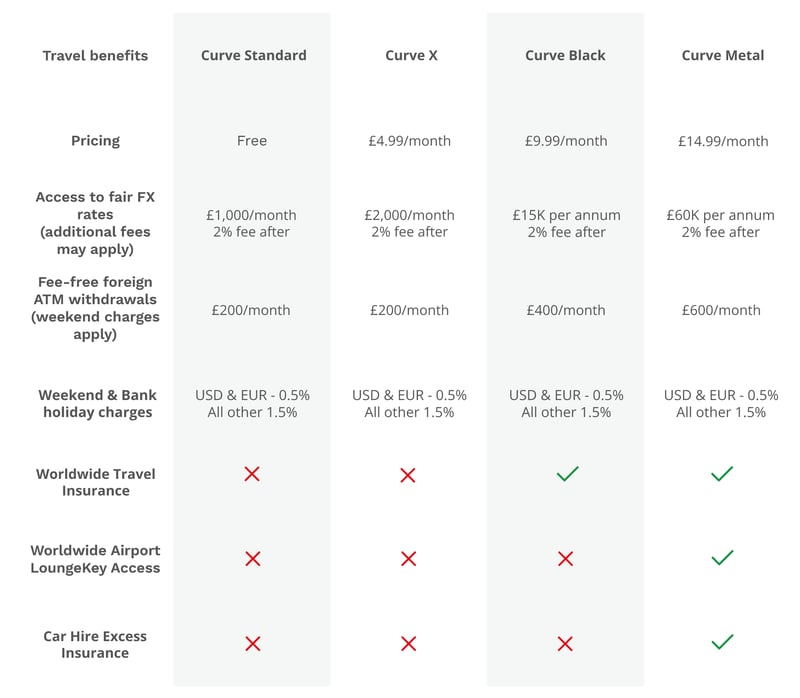 What are Curve’s fees when spending abroad?

Curve states that: “We use a wholesale fixed daily rate provided by Mastercard® which stays the same throughout the day. You can use the Mastercard® Currency Converter Calculator to check the rates of your transactions."

What are the different charges applied by Curve?

Curve have set “fair use” limits above which they charge an additional 2%. For example above £1,000 per rolling month can be spent in foreign currency on their free card.

Curve have also added the same extra charges to bank holidays as well as weekends.

The weekend/bank holiday effect is significant here - It means that you could face a hefty increase on the FX fee you thought you may get based on your activity running up to that weekend.

For example, if you are on the basic account and have already spent over your £1,000 monthly limit, if you checkout of your hotel, you would be faced with a 2.5 - 3.5% FX fee on that transaction (and every transaction over that period). These fees can quickly add up and impact the total amount spent over the duration of a trip.

What other fees does Curve charge?

On top of their exchange fees, fair use fees, weekend fees and ATM fees, what other fees does Curve charge? While Curve doesn’t charge for the card itself (unless it needs replacing), there is a £4.99 delivery fee on the free plan. If you’re looking at the other subscriptions you won’t have to pay for delivery but you could be hit with a £50 replacement fine if you lose your second metal card.

Why would you use Curve?

For those who find it inconvenient to carry a number of cards in their wallet while at home or when travelling, Curve can help solve that problem. It also means that if your wallet gets stolen, you only lose one card, which you can freeze easily. (but remember if you use an Amex card, you would still need to carry that, as Curve does not accept payment via AMEX).

From a rate perspective, if you stay below their fair use threshold and don’t spend on the weekends or in volatile market conditions, you can generally expect to be charged less than you would using your high-street bank debit and credit cards, but it does require constantly checking your allowances on the basic account so you do not fall foul of the additional FX fees.

Currensea was founded by James Lynn and Craig Goulding in 2018, then launched in 2019 aimed at removing hidden FX fees for travellers when spending abroad and the hassle of topping up or prepaying.

Currensea is the UK’s best rated travel debit card. The layer in front of your current bank account, saving you money, giving you extra security and making your bank work that bit harder for you.

What are they offering?

Currensea's travel debit card partners with your current bank account to save you at least 85% on all overseas transactions. No need to prepay, no need to top-up, no need for a new bank account. Spend as seamlessly abroad as you do at home, with the money only taken from your existing bank account after you’ve spent.

What are the different charges applied by Currensea?

Currensea offers 15 currencies at the real (interbank) exchange rate and 165 currencies at the Mastercard exchange rate (which is the rate also used by Monzo, Starling and many other FinTechs). When signing up for the free plan, users will be charged at a flat FX rate of 0.5% over these two base rates - with no extra charges over a certain amount or at weekends, it's that simple.

What options and plans does Currensea offer?

Currensea has no additional weekend charges, or fair usage limits on any plan.

So how does Currensea compare to Curve? 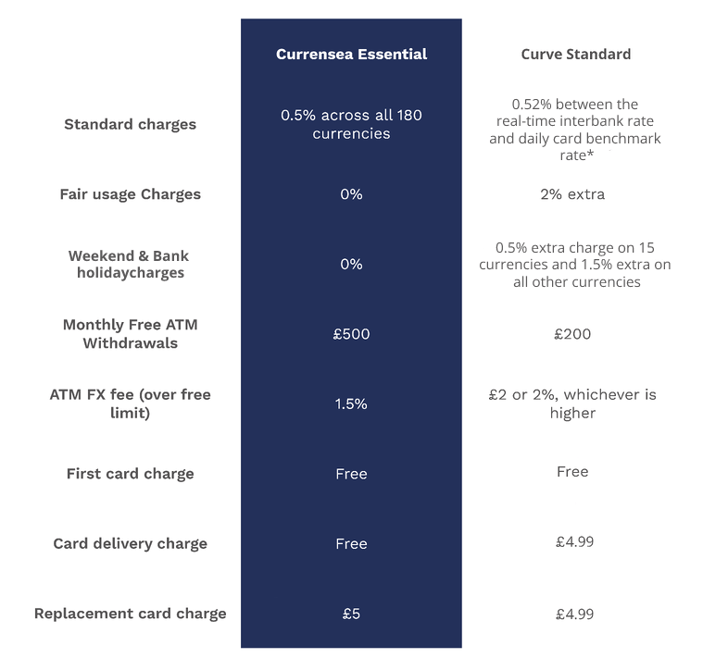 Curve is a good card for weekday travel with a small charge of 0.52% markup on the real-time interbank.

However, Currensea charges a lower charge of 0.5% on their free plan making the difference 0.02% in Currensea's favour. While the difference is minimal, Curve also charges an extra 0.5-1.5% on weekends and bank holidays (0.5% on € & $, 1.5% on all other currencies). Plus, if you spend over £1,000 with Curve, you'll be charged 2%, while Currensea has no spending limits.

So in summary, due to Curve’s weekend fees, fair FX usage and ATM limit of only £200 a month. Currensea is cheaper in all scenarios.