Is travelling Green as easy as it sounds?

*Disclaimer, I was lucky enough to visit Portugal during those few short weeks it featured on the Green list.

Like many, I was desperate to travel abroad, so ahead of the May 17th earliest travel date announced back in March, my partner and I decided to book a trip to Crete for the 23rd to avoid being hit with (what we suspected) would be soaring prices. We booked accommodations through Voyage Privē and our flights through British Airways, so felt comfortable that even if we had to move/cancel we’d be happy to receive vouchers.

Whilst the FCO has advised against all but non-essential travel to Greece, Crete falls under an exemption due to Greece prioritising its islands throughout the vaccination roll-out. However, Crete was nowhere to be seen on the green list put together by the UK government. Instead Crete sat with the rest of Greece on the Amber list.

Well the most important difference is that only essential travel is allowed from the UK to amber list countries, and even if you do go, you have to quarantine for eight days after you return (unless you pay for a day 5 early release test) depending on a negative PCR test result. Unsurprisingly we received an email from Voyage Privē cancelling our all-inclusive getaway, which I think even we might have struggled to justify as essential.

Luckily we did some research the evening before so we quickly cancelled our flights with British Airways and received our vouchers within ten minutes. It was straightforward to move everything over to Portugal, one of only two European countries (Iceland) featured on the green list. There had already been some surge in price for comparative trips before the lists were announced, our 7-day vouchers were now only worth 5 in Portugal. The government announcement stated that the green list travel could take place from the 17th of May and would be reviewed every three weeks, so we kept our 23rd flight date to make sure we were back before the review.

Getting fit to fly 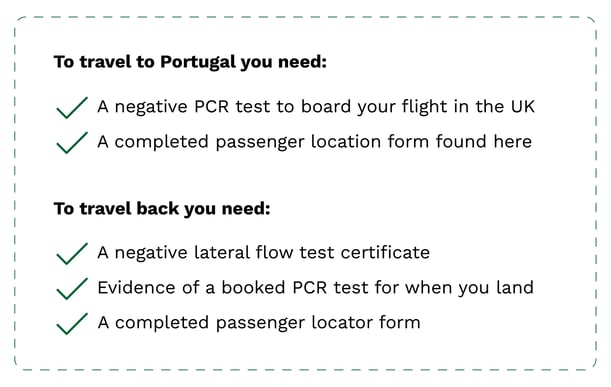 Before travelling it’s important to ensure that you book a PCR test to take within 72 hours of your departure time. It’s best to get on with this as results can take 24 hours to receive, so to avoid the stress of last-minute results it’s important to be prepared.

There are several providers on the market but I went with Randox Health. This solution would not be suitable if you booked really last minute, as the pack can take two days to arrive and the results take another 24 hours. I had a look at different options but with British Airways discount code, we received 50% off of their ‘Green List Testing Pack’ although checking their updated prices it seems that tests are much cheaper even three weeks later down the line, even without a promo code. 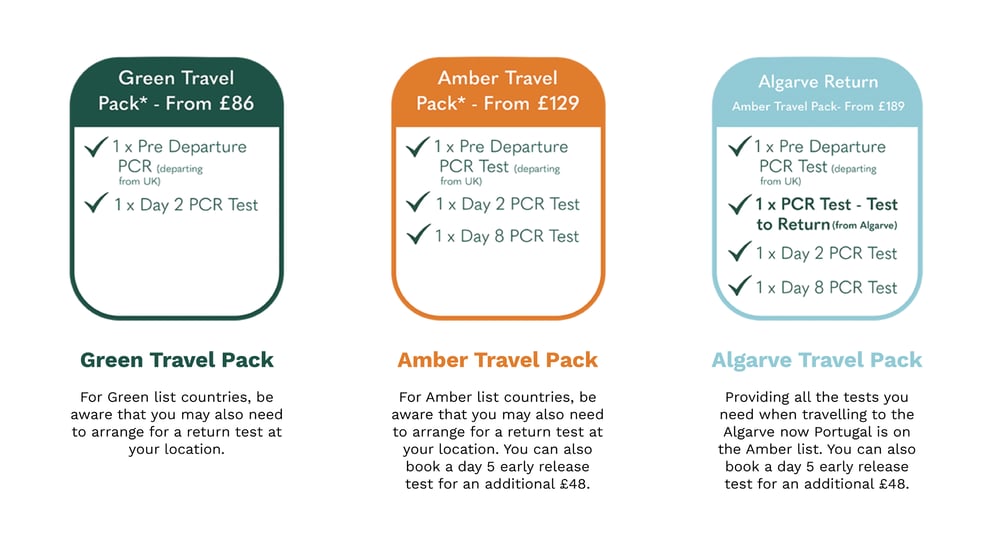 At the time of my trip, the Algarve Return Pack wasn’t yet available, but this would make your tests much more affordable especially if still travelling since the move to amber - with 4 PCR tests included for just over £200 (just make sure there is a Randox drop box near where you’re staying to complete the 72 before return flight test).

The whole process was really simple. As we were flying at 07:05 on the 23rd, we completed our tests at home around 08:30 on the 20th (within the time window) and I took both completed tests into work as there was a dropbox near my office (Dajani Pharmacy dropbox on Old Brompton Road). We received our negative result certificates within 24 hours so we were all clear to go!

Which test provider is best for you? 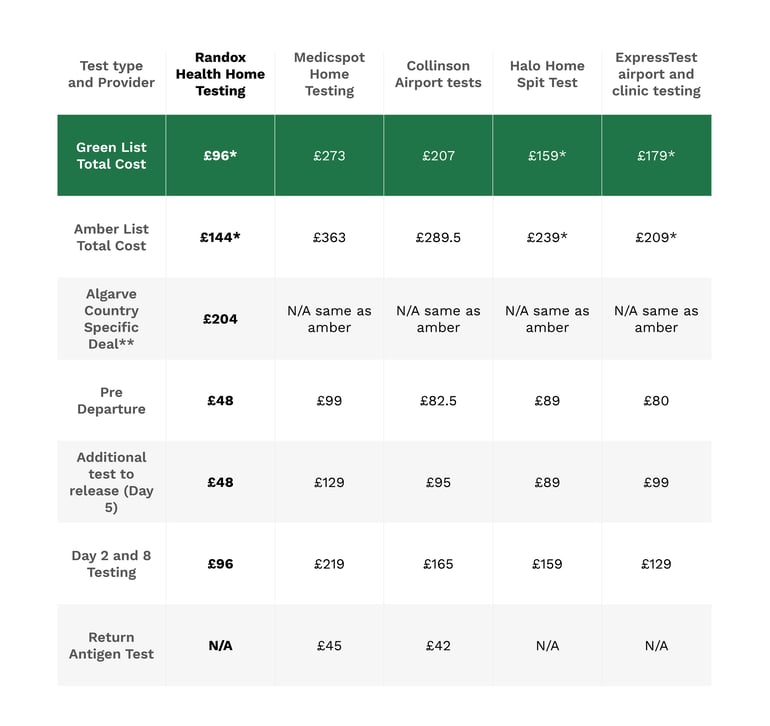 British Airways requests that all passengers upload relevant travel docs to a portal (you’ll receive an email with a link) before arriving at the airport, this includes a negative test certificate and your passenger locator form. Each passenger is required to fill out a form, there are steps to follow so it's easy to use. Just make sure you have your booking details to hand.

Arriving at the airport

With the surge in ticket bookings in economy, there was only a £100 difference between economy and business, so we upgraded our flights with the added benefit of free luggage and Lounge Access.

The airport was relatively empty, definitely nowhere near as busy as Heathrow used to be pre-COVID. We arrived three hours early, just in case there were extra, unexpected, tests and checks. The whole experience was extremely easy, the kind man behind the counter checked our document reference numbers against those we submitted online and we were through to security within 5 minutes. 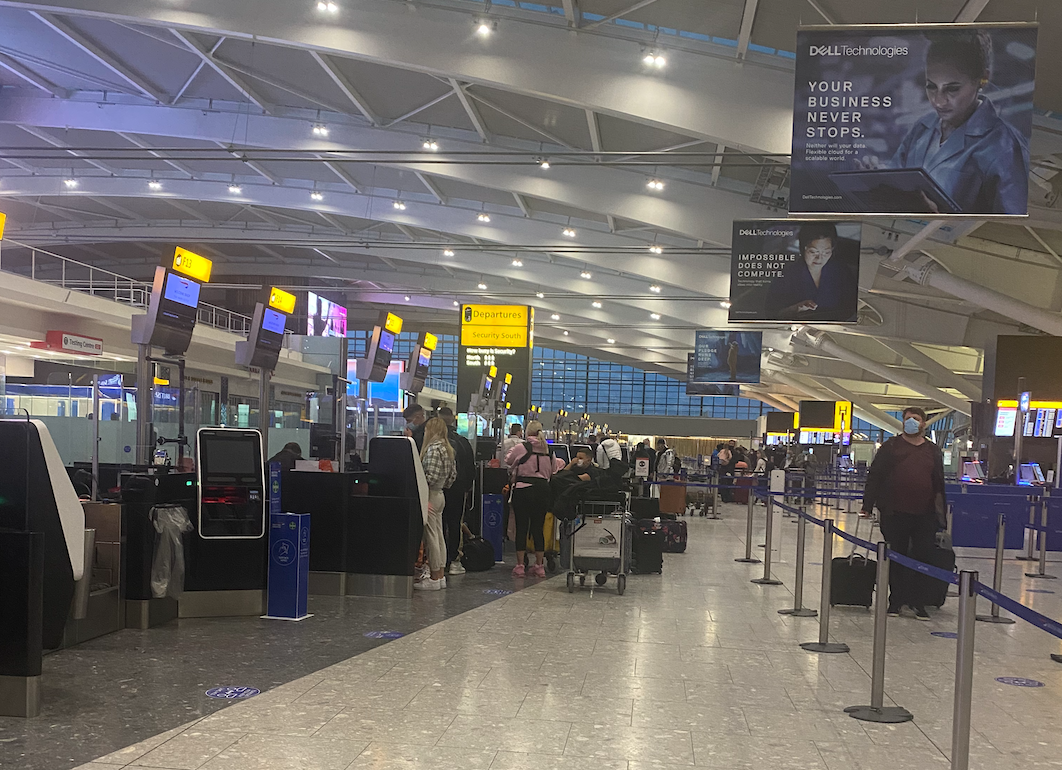 The lounge experience was everything you’d expect, the only difference being that it was table service only as per government guidelines, with the same QR system we’ve got used to in pubs. The only business perk that was missing was the fast-track security at Heathrow and priority boarding.

Once on the plane everything is as you’d expect in Club Europe and Economy, the only difference to Pre-COVID is that you must wear a face mask when not eating or drinking.

After reading the news I had prepared myself for a queuing nightmare, but much to my surprise the airport was completely empty. In fact the only real difference for me was that you now get a stamp in your passport when visiting an EU country. There were no document checks, although when we spoke to the Taxi driver in Faro he said that the week before everyone was checked. I presume it’s a random checking process now, but British Airways won’t let you board without the correct documentation in the first place. 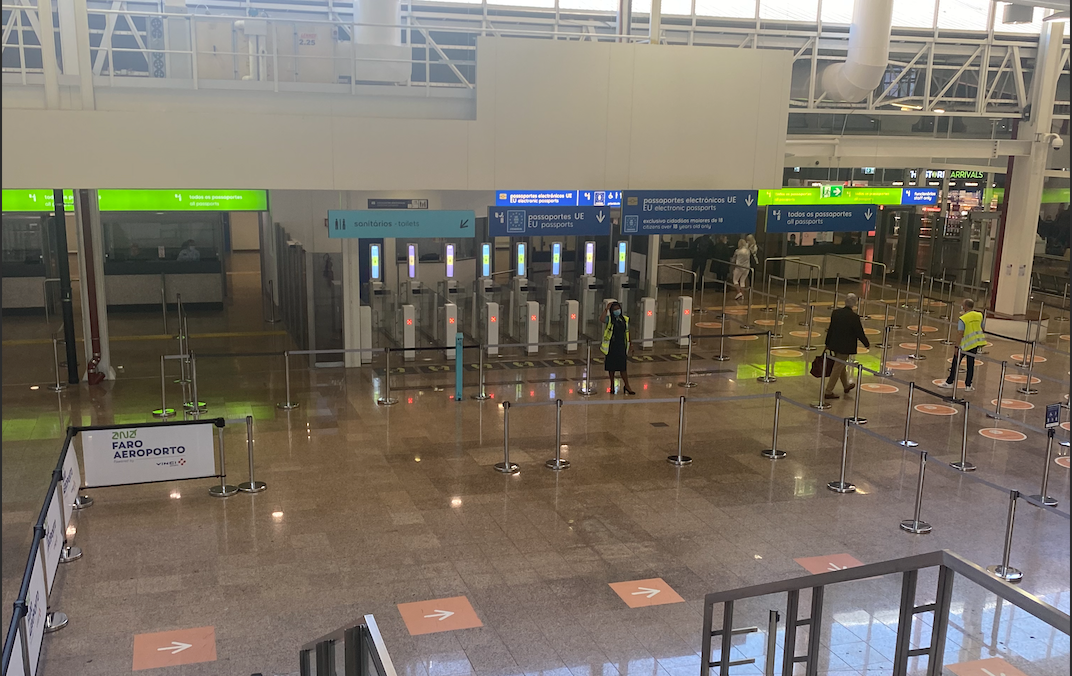 Firstly, you cannot use the free lateral tests that you may use at home for work. You need to use an authorised provider that sends you a full certificate with your name, passport number, date of test, time of test and test result. Anything else might not be accepted when trying to board the plane home.

Before I arrived in Faro I booked a test through Aqualab as they appeared to have the largest selection of locations for a drive-through test. You can book a test at Faro airport before you drop your bags off, but I was concerned about the queues and decided it was best to be prepared.

Three days before we departed from Faro we went into Lagos to find the testing centre, we turned up at the wrong clinic but did find someone who gave us another location for the drive through from 11:30am and told us we needed €30 per test in cash. It’s safe to say we got completely lost and almost gave up before calling an Uber who happened to stumble upon the testing tent. The tests didn’t take much time when we were there as you’d expect, with the results arriving in under 7 hours.

However, whilst we were trekking around Lagos searching for a testing centre in the heat, a number of couples that we spoke to around the pool had a much more stress-free experience. If next time I travel the same rules apply I would follow their guidance and order Lateral flow tests through either Medicspot or Collinson. With these tests you can take them with you and either complete them over zoom or without (depending on their processes), then send an image of your result to get a certificate. There is currently a shortage of lateral flow tests in Faro so now more than before, I recommend sourcing a test in the UK.

Returning to the UK

Two nights before we made sure our passenger locator forms were completed (we heard of one couple turned away at the airport and not allowed to board as they didn’t complete on time) and our test results were to hand.

As we did on the way out, we allowed for three hours at the airport just in case there were checks. The airport was definitely busier at Faro compared to Heathrow, but nothing compared what you’d normally expect. When we got to the front of the queue we had to show the QR code for our passenger locator forms and our negative result certificates… only to be told our negative results couldn’t be accepted because they were in Portuguese rather than English French or Spanish (the only languages accepted at the UK border). WHAT?!

Luckily the lab must have had the same frantic call a few times that day as we called the number on our certificates and quickly someone was able to help. We received new results within 5 minutes, but as you can imagine this wasn’t quite the relaxing experience we had at Heathrow.

Vs what we needed:

So remember to check your results before you turn up to the airport.

The queues at security were huge at Faro, luckily fast-track did apply for Club Europe Travellers, so the time saving made up for some of the time we used trying to contact the lab for an updated certificate.

So out of all the perks that made upgrading worth it, getting off the plane first after landing at Heathrow had to be the best. Lets face it, waiting at passport control with the overwhelming holiday blues has never been ideal, but now with so many more documents to check the queues are even longer and quickly back up.

We waited for about twenty minutes before reaching the front, but had friends who arrived a few days later that waited for closer to three hours. To get through security you’ll need to have your passport to hand (goes without saying) as well as your negative lateral flow result, passenger locator QR code and proof of your day two test booking (an email receipt was enough). If any of these docs are missing it can really hold the queue up, but unfortunately you’re relying on hundreds of people to get all their documentation spot on, which lets face it is unlikely at the best of times.

Was it worth it?

In one word, yes!

It was great to travel again, if you’re prepared it removes a lot of the stress, and like most things once you’ve completed the process once, you always feel more prepared the second time around.

It’s great to see travel opening again and I am hopeful it will continue over the summer months, whilst there has been a slight setback with Portugal now placed on the amber list, the list is reviewed every three weeks.

Even better, I finally got to use my Currensea travel debit card abroad, saving over £30 throughout the duration of my trip, even though I was in an all inclusive, I still needed to make a few transactions when out and about, so it was still really useful to have the card for this.