Who is Revolut? Our review

The challenger bank Revolut launched in 2015, originally bringing their prepaid card to market that aimed to remove fees and serve its users better than banks were. They have since transformed into a fully fledged digital bank. Now worth a staggering $5.5bn, is this neo-bank still looking after their customers?

What card options and plans do Revolut offer?

Each plan comes with a range of travel spending perks including unlimited spending in 30 currencies and free lounge access when your flight is delayed at the premium plan.

*Rates and charges shown are correct as of 5th May 2021 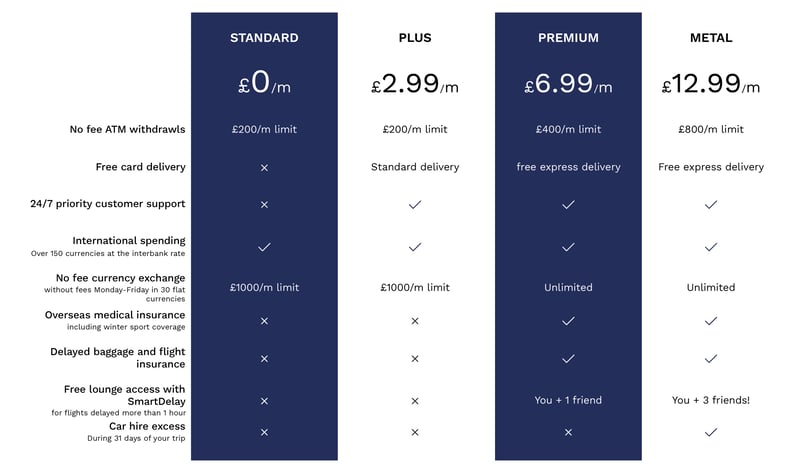 Why would you use Revolut?

It’s well known that High-Street banks often apply hidden charges, even when ‘zero fee’ exchange rates were advertised the fees were often hidden in the extra rate. However, with limited options on the market, other than expensive travel Bureau de Change providers, a number of consumers swallowed the charges.

Revolut pioneered the travel money card market offering a new solution to consumers that allowed them to preload their account and convert to 150 currencies, reducing a number of these hidden charges.

By challenging the charges applied by the banks, consumers became more informed and empowered in their ability to choose new solutions. But even with a new choice on the market, a number of consumers still choose to swallow the bank fees and use their existing debit card to avoid the hassle of managing a separate account when they’re abroad.

What fees do Revolut charge? 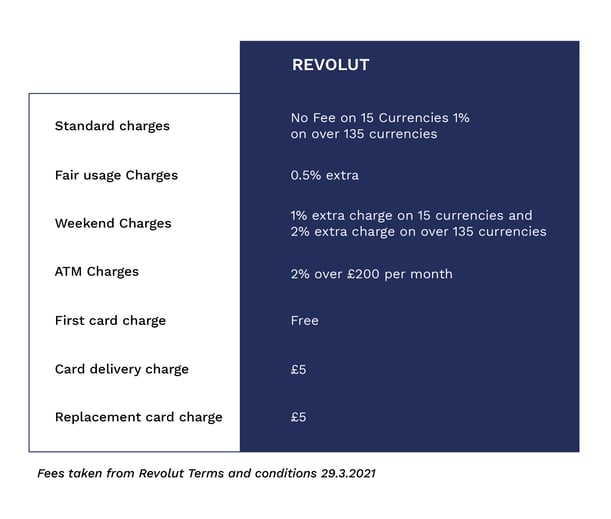 What are the different charges Revolut apply?

Revolut offers over 150 currencies at the real exchange rate, but there are some hidden fees you need to be aware of. We can see in the T&C’s that only the 15 most common currencies are actually available at the interbank rate rather than the 150 that they state.

There was some confusion over which currencies are considered as a “less traded money currency” as only THB and UAH are listed, but when we spoke to their customer service team (on 27/06/2020), they confirmed that all currencies other than the listed 15 are not available at the real rate and instead incur a fee – when we looked at the exchange rates for other currencies, they were away from interbank but not quite as expensive as the 1% added to THB and UAH.

So how does a Currensea travel debit care compare to Revolut?

Currensea's travel debit card partners directly with your existing bank account, so you can spend with confidence and without the need to top-up or pre-load.

By partnering with your existing bank account you can spend in all 180 currencies just as you would your normal debit card, but without the fees.

What card options and plans does a Currensea travel debit card offer?

Currensea currently offers three pricing plans, an Essential plan, a Premium plan priced at £25 per year, and an Elite plan priced at £120 per year. Access the best rates at only 0.5% above the FX base rate on our Essential plan, saving you at least 85% on every transaction, or 0% on our Premium and Elite plans, saving you 100% on every transaction. Elite also provides cardholders with access to a world worth of benefits including concierge and LoungeKey access. 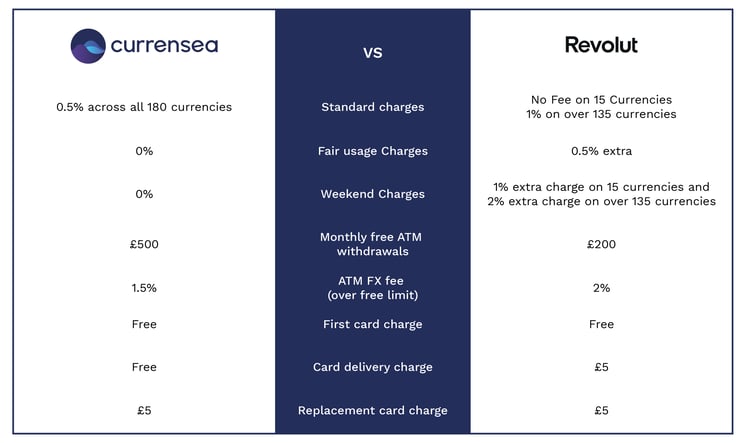 Do Currensea have any other charges?

Currensea offers 15 currencies at the real (interbank) rate and 165 currencies at the Mastercard rate. When signing up for the free plan, users will be charged at a flat FX rate of 0.5% over these two base rates – with no extra charges over a certain amount or at weekends, it’s that simple.

What is Revolut’s Fair usage fee?

Currensea does not have any such fees for using their travel debit card. You have your set monthly limits, but anything you spend is at the same rate of 0.5%

So how does Currensea compare to Revolut on fees on their free plans?

If you’re going on a European trip during the week and planning to spend less than £1,000 for the duration, Revolut would be the cheaper option as the fees would be 0% compared to Currensea’s 0.5%. Although the cost difference would only be 80 pence, as Revolut charges a £5 delivery fee for their free card, whereas Currensea sends you a card for free. Plus, if your trip is over the weekend Revolut would become 0.5% more expensive at 1% and if you spend over £1,000 you need to add on another 0.5% meaning that Revolut’s charges would be three times that of Currensea.

Alternatively, if you are planning a trip to South Africa for a week, even if you spend less than £1,000 during your trip and make exchanges during the week rather than at the weekend – Currensea would still be the cheapest option as we add a 0.5% fee on top of the interbank exchange rate, whereas Revolut adds 1% during the week for all spend and an extra 2% at the weekend bringing the total fees to 3%.